"I am what you make me; nothing more. I swing before your eyes as a bright gleam of color, a symbol of yourself." Franklin K. Lane, Secretary of the Interior, June 14,1914 spoke of what the flag had said to him that morning.

Flag Day can trace its history back as early as 1885 when BJ Cigrand a schoolteacher in Fredonia, Wisconsin had the students honor the 108th anniversary of the adoption of the Stars and Stripes as ‘Flag Birthday”.  Through the years the movement grew until on August 3rd, 1949 when President Truman signed an Act of Congress making June 14th of each year as National Flag Day.

Today we honor the Flag that represents our great country. I have personally seen our nations flag fly over military bases, atop Navy ships, at national cemeteries, over national monuments, at federal buildings, local courthouses, school buildings and in front homes in every town that we have lived in, but the one that touches me more is the one that flies at our house! 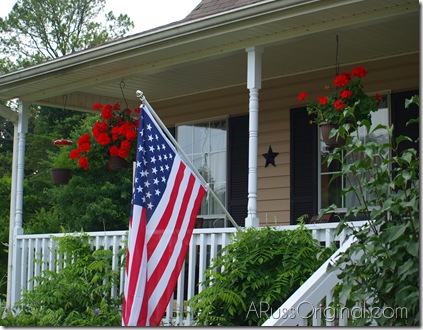