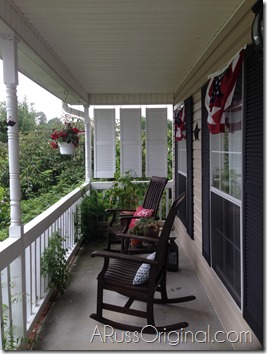 The summers here in the eastern part of TN can be kinda hot… and steamy. And while I can’t do anything about either, I do try to make the best of it! Our front porch is AWESOME! Truth be told, it is one of the biggest reasons we bought the house (that and the fact it has a pot rack hanging in the kitchen!) I like to spend time on the front porch in our rockers, I eat my dinners out there when I can. I like to take a book or magazine out there and enjoy the space… BUT… there was an issue with the late day sun, not just on the porch, but it would beam into the living room and make sitting inside (in the air conditioning) blinding!

So needed to find a solution. I have played with the idea of hanging a drop cloth type curtain on the end of the porch. Maybe I could grow some vines, wait, scratch that… I needed something that looked like it belonged, but still blocked the sun. Something to let the breeze through but not the rays… THEN, my friend bought a little ranch house with shutters on it. She didn’t like the way they made the house look, so she and her husband took them down. WIN for me! These are great shutters too, solid wood not the cheap plastic ones… I was so excited, well… for her, after all the house does look so much better without the shutters!

She brought the shutters over and they sat in my shop for a few months while my life got busy and I had no time to work on projects… sad, but that happens to me a lot. Good thing I don’t make a living off finishing projects around my house!! The needed to be painted, after all one side was red/brown and the other side white, well of course I wanted both sides to be white! My friend who donated the shutters to the cause got a new gadget for Christmas to spray paint with… it hooks on the end of a compressed air unit and sprays paint… I know! What will they think of next!! So we picked a date and I loaded the shutters up and took them back over to her place so we could ‘spray paint’ them! Here is Laurie working her spray painting magic! 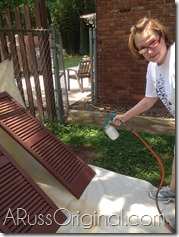 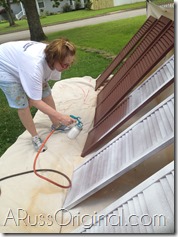 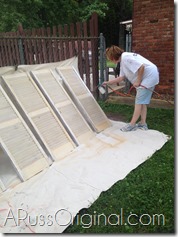 When the shutters where dry and travel worthy, she brought them back over to my house … where they sat in the shop for a few more weeks until I had an opportunity to gather the hardware to hang them from the existing beam on the porch. Our office was closed Friday July 3rd and I had an hour before I had to run out… so I got the shutters out along with the hardware and got to work! After a few pilot holes were drilled, in both the shutters and the beam, I installed the hooks and eyes and had these baby’s hanging up in no time!! 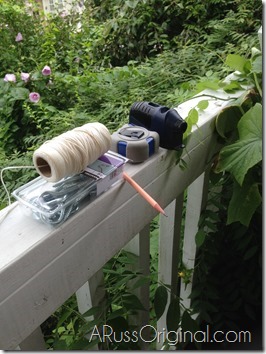 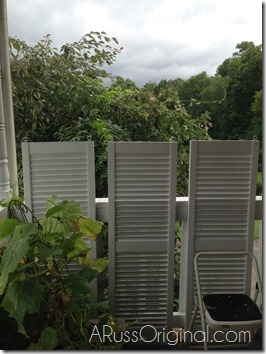 I am SOOOOO pleased with the finished project and can’t wait for a tad cooler weather so I can sit out there and enjoy the breeze… in the mean time the shutters are shading enough sun to make my husband notice the effect in the living room! 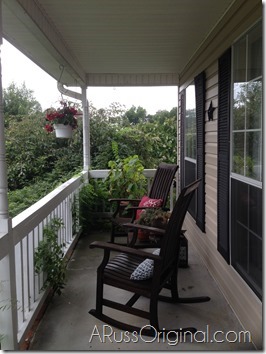 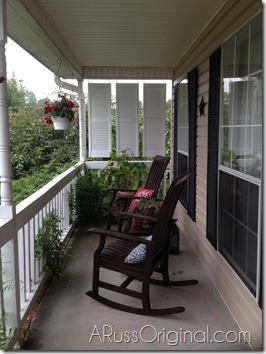